Rent a Living Christmas Tree or Recycle Yours the right way 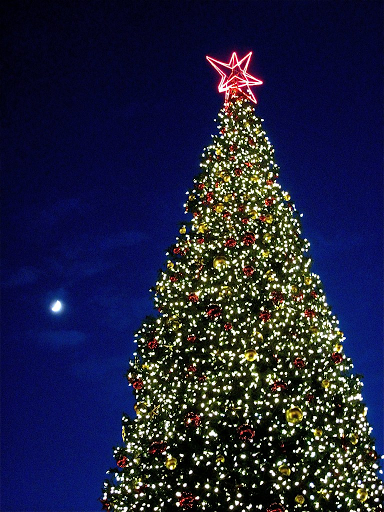 "Union Square Xmas Tree" by cogdogblog is marked with CC0 1.0
"Renting a christmas tree" is a slow-growing ( ) movement. This article is for the UK, but there are some vendors in the US too.
https://www.countryliving.com/uk/homes-interiors/interiors/a29695669/rent-christmas-tree-cotswold-fir/
Central CA https://rentxmastree.com/rent-a-christmas-tree-frequently-asked-questions/

A list of farms in Western Pennsylvania that provide tress

I get a "suggested post on facebook" from Groupon, alerting me to Great Deals on vegetarians restaurants.

This is the teaser picture: 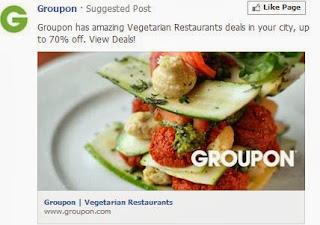 Fine. Nice teaser picture, looks like a great vegetarian entree.
I click on it, it takes me to Groupon's deal page and this is what I get!! 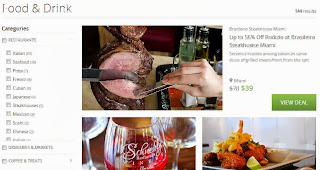 Really, Groupon? You can't build a query to actually pull up vegetarian restaurants? Instead you go one step beyond to 180 degrees and show a juicy steak? I personally don't care, but it defeats the whole idea of targeted marketing! The picture in the right bottom is ceviche.. fish, which sometimes is forcibly thrust as a 'vegetarian' option in some places, but come one. A fish is a fish.

The deals look very appetizing but Miami is hardly the vegetarian capital of the world. I am not sure if it was facebook or groupon, who did some mistaken targeted advertising and failed at it!

Can you avoid the flu?


Tips for Preventing/Dealing with Cold/Flu etc

We need to be more Proactive in preventing the flu than just trying to shield ourselves from the virus (which seems to be the basic cdc recommendations). I am fine with that, because we don't need the government to tell us everything, right? (insert political joke here).

Below I reproduce some tips that have worked over the years for me in avoiding the flu and cold etc. In order to bolster my opinion, I searched the internet and came up with some good pages written by medical doctors that reiterate some of these symptoms well.
Recently, however, I slipped up on some of these tips (especially getting good rest) and I promptly got hit by some flu/cold and have lost several productive days in January. However, I have been more conscious in February, especially with my sleeping pattern, and feel more healthy!

For being proactive on the "Common Cold" it is beneficial to add these things to your diet: Turmeric, Black Pepper, Ginger.

For sore throats and cold though, the best (imo) remedy is to cut fresh ginger, take some whole black pepper kernels, add these to a spoon of honey and chew it up.

(For Vegans) Another manner to ingest turmeric powder in raw form is to take 2 tbsp of the powder and add it to ~200 ml coconut water and shake it up and drink. I usually added some fresh ground black pepper also to it.
Note that I did this last year for 15-20 days when I wanted to reduce antibiotic usage during some bacterial infection I had in my foot that started from cutting into an athlete's foot scale. While that may or may not have been the reason for the cure, it helped with an overall immunity boost.


Some of these tips were adapted from: www.mercola.com
Disclosure: Would like to point out that the site mercola talks at length about the (in)efficacy of flu vaccines. I am staying neutral on that topic so far as I do not have my own evidence to draw a solid conclusion. I have also not reviewed the evidence discussed on that site.
No comments:


Some days back Penn State Research posted on my facebook page, a link to an article in Poultry News which referenced a study published in the Journal of Food Safety [1], by some researchers at the Pennsylvania State University. The poultry news article, give credit to them, only said - Farmers Market chickens may contain more pathogenic bacteria.
After reading through the news article, I downloaded the journal article itself and started preparing this post. This morning I see a more sensationalist titled article in the ny times blog. A statement: Farmers Market Chicken Higher in Bacteria".


Note: This article discusses bacteria found in chicken. Specifically salmonella and campylobacter. The underlying links under the words for these pathogens take you to the Center for Disease Control (CDC websites).

Primarily, the journal article and at a larger level the "Poultry Site" both project the idea that food from farmers markets may not be "safer" as commonly believed. It is interesting they try to twist the data of naturally occuring bacteria content in raw meat/produce and try to connect that to "health".
By and large, a lot of people tend to go for organic or locally raised foods  - especially the ones that have not been treated with synthetic chemical pesticides/insecticides/antibiotics during the production cycle [2]. This "lack of chemicals" (in common parlance) is viewed as one major benefit from locally raised/organic food. Locally raised foods fit this criteria on many occasions based on a trust that gets built up between the farmer(s) and the consumers . In many cases, local farms get weeding help from community members and these kind of interactions establish the framework of trust that the weeding is indeed done in an organic farming method and not using weedicides (true test by a skeptic) [3].

Coming to the article in the Poultry site, what I notice is that the first paragraph itself has a gross error in reporting the data from the journal paper. The report in the poultry site has some of the numbers in the table mixed up though. On the poultry site they mention 52% of conventional chickens to contain salmonella - but that is not what the study in the journal states (see screen shot below). 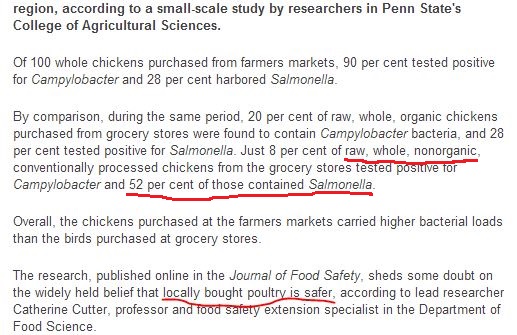 There seems to be no easy to way to add comments or point out errors to that poultry site so if anyone knows how to contact the article authors there, please shoot me an email at psusaver at gmail dot com. Thank you.

Link to Article on Poultry Site (note that the article at the site may eventually change and I hope it does, to be accurate).


the useful part of these articles: Bacteria that cause foodborne illness, such as Campylobacter and Salmonella, are destroyed by proper cooking  (at 165 C) of poultry products; however, they also can cause cross-contamination if they come in contact with other foods through contaminated cutting boards, sinks, countertops or utensils.

The headline at the Poultry site as well as in the NYT blog article (published on July 18th 2013), miss the fact the conventionally processed chicken contain campylobacter in 52% cases in this study [4]. This is a matter of great concern, because "store based chicken" are supposed to be already under strict health/agriculture department regulations. The percentage of population that consumes foods bought from conventional stores is substantially higher than those that consume food from farmers' markets.

The existing regulatory machinery as well as the conventional agribusiness needs to do more to fix the issues with the regular supply chain, before trying to overburden themselves targeting much smaller segments that reach only a smaller portion of the society.

The NY Times article is way more sensationalist and just attention grabbing and frankly, is quite deplorable to see NY Times acting like - Sun in UK or Midday in India.

[2]: Based on conversations with other consumers as well as farmers in Villingen-Schwenningen, Southern Germany (2002), Delhi/Chennai, India (2010) and State College/Boalsburg, Central Pennsylvania, USA (2005-13 and on going).

[3]: Invitations to help out in weeding by local organic farms via Facebook and at Farmers markets in State College, PA United States (Summer 2013). A basket of produce is offered in exchange for volunteering to help.

I heard about Color Run sometime back.. the next thing is Electric run (5k)! -nighttime running with neon lights etc...

running/dancing your run in the evening could be fun..lil pricey (at $55 per person if you are in a team)! #party - Philly anybody?
No comments:

Steamed Veggie Salad Seasoned with Sesame Oil, pepper and SaltI had a very simple, but tasty lunch today. Later on, I realized that what I had made was actually vegan. Here goes, I steamed some frozen broccoli, cauliflower (5-6 mins), then added some kale - let that steam 2 mins, then finally added some mung sprouts and almonds to the top of the veggies in the steamer, turned off the heat and closed the lid. 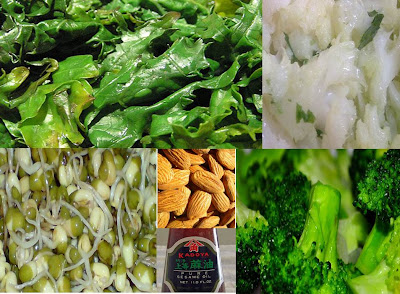 After a minute, I laid out these steamed items in a bowl - sprinkled some pepper and salt and drizzled some sesame oil and chowed it down fast. Wait, after two bites I also brought out a wedge of lime and squeezed that over this "salad?".

Anyway, the main thing i realized was that it was the first time I had used unheated sesame oil to season vegetables (I do olive oil usually) and the flavor was great! Has anyone else tried that? A picture of what I made with the ingredients in roughly volumetric proportion is attached!

Some of the images are a montage from the following flickr cc users. Many thanks to these users!

The statements made here have not been approved by the Food and Drug Administration (FDA). These opinions/statements and other protected speech are not intended to diagnose, treat or cure or prevent any disease. This notice is required by the Federal Food, Drug and Cosmetic Act.
Use common sense and your own judgement before attempting advice given on the internet.